Should You Use Memes and Gifs in Your Internal Communications?

It is extremely obvious that internal communications should be eye catching. 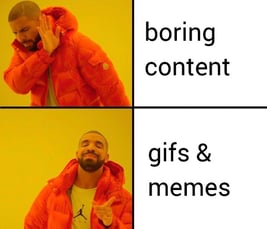 No one is debating this, as it has been proven again and again that poor communication within a company can have disastrous effects on its employees. But realizing that you need to improve your internal communications is only the beginning because from there, you need to figure how to improve it. One way that has come up in discussions in the last couple years is the inclusion of memes and GIFs.

GIFs and memes are hailed by some companies as a great way to get across content in an effective way, while others are not so convinced about their role in business. However, when this topic comes up, it is often in reference to outwards marketing. Deciding whether or not to include it in your internal communications is an entirely different conversation. In an effort to help you decide whether or not you should include GIFs and memes in your communications, we have constructed this article examining the good and the bad.

Most companies nowadays realize they only have a short window of opportunity to grab their employees attention, but few realize just how little time they actually have. While the time varies from study to study, the general consensus is that you have around 40 seconds. That is all the time you get before your employee decides that their time would be better spent doing something other than reading your messages.

That is why the ability to easily grab someone’s attention that GIFs and memes possess is so
valuable in the world of communications. A bunch of text will not give the reader any reason to stick around past those 40 seconds, whereas a couple GIFs or memes might be enough to get the reader to invest enough time in the communications that they decide to read through all, or at least most, of it.

While this might seem like a very blatant positive aspect, it actually doubles as both a positive and a negative aspect. As previously mentioned, GIFs and memes get people’s attention and once it has their attention, they generally elicit an emotional response far more than the majority of text would. However, they tend to stop there, at entertaining. GIFs and memes do not inspire action or involvement of any kind other than a quick chuckle. If you are looking for some employee interaction other than just reading the content, then maybe using a bunch of GIFs and memes is not the right path.

You also have to know when to use them and when not to. In a lighthearted holidays email or your
monthly newsletter, the inclusion of some GIFs and memes can be a nice touch. However, when dealing with more serious topics like sexual harassment, they can easily come across as unprofessional and disrespectful, so it is best to stay away from them in those instances. In most cases, your internal communications department has to use their best judgement in whether it is appropriate or not.

For more information about what to include and what not to include in your internal communications, contact us today.

The Future of Employee Tools is Mobile First